Days went by unacknowledged. So much had occurred that I had to transcribe my experiences. Lest they be lost in the midst of my ever-changing rapidly moving thoughts. I had to write. I had to physically put words to paper or else I would feel as if the memories would not be enough. The words make it all real. Seeing it all in script gives me forever…I set my intentions on living in the present. Thus far I have been successful in that task. I admit, I still have pings of loneliness, moments were I reach out in the middle of the night or wait expectantly for someone else to get a punch line that only he and I would have laughed at. But that’s okay, I’m allowed to feel. It’s the lessons embedded in those feelings that really matter. As such, January has been kind to me. It has provided me with many opportunities to relearn myself. This month has reassured my purpose, my meaning and my existence. All the doubts that were created last year; it has been proven beyond a reasonable doubt that never once was I lacking. Not one single moment passed where I could not have made it on my own. January has reignited a flame in me that I had subtlely allowed to dim, and now I have no qualms about letting it shine brightly.

I lost count of the times that I told myself that I was going to write a book. It seemed more so a dream than reality. But throughout the years I have told myself I would be plenty of things. A wife, a mother, an attorney… The title of author was the unexpected one. I hadn’t put forth much preparation, no real planning, only the thought and the hope. It was in the meantime when it happened. In a moment where I thought I was beyond repair, and where my heart had been completely broken, the Universe saw fit to let things fall into place. I was forced to focus on the present. Had I continued to hold on the hurt or the past, I for certain would have self-destructed. I’m finally beginning to notice that the majority of the magic happens in the meantime. Not when you’re obsessively plotting or planning, trying to force pieces to fit a certain way and interrupting the natural flow of things. It’s in those peaceful moments where fate has the chance to align. Great things happen when they are supposed to. Divine timing. God. Just do the work and the reward will appear in the meantime.

I’ve travelled quite considerably these last two weeks. My travels took me to Durham, North Carolina where my published author journey began and to Barbados where I initially thought my wife/motherhood journey was going to begin. I had not been focused on the meantime. North Carolina bestowed me with many gems. I attended #NewYearNewMe2019 hosted by Dr. Nicole Swiner of Swiner Publishing. I laughed, I felt love, but most importantly I learned. Iron sharpens iron, and real growth occurs when you are well nourished and fully fed. The ladies and gentlemen in attendance filled me to the brim. I made necessary connections and was even able to provide Phonte Coleman of The Foreign Exchange and Little Brother fame a copy of my book. I left Durham encouraged…

There wasn’t too much time in between trips for reflection. I rushed back to Houston and hurriedly packed to leave the country four days later. I didn’t think I would make it to Barbados. Bridgetown, Barbados was initially booked as a couples trip, our first international vacation together. When things unexpectedly ended, the trip too was left in the cross-fire of unfinished business. I knew I would not be strong enough to take that venture solo back in November. So I changed the date to January and dived right in the meantime. Barbados was a full awakening of sorts. It was a declaration of freedom. I was given the opportunity to finally let go of a lot of the pain I had been holding on to inside. Listening to the sounds of the waves was healing. It was a salubrious moment that forced me to be present. I inhaled and exhaled out months of heartache. The sun soothed my soul. The vibrancy of the island rejuvenated me. I came home full of life of again. I finally had peace in the meantime. 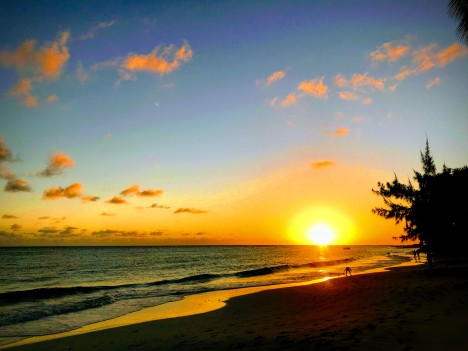 Barbados was too magical to merely mention in one post, so I will dedicate more time for a full length review of the island. Until then, revel in the sounds of the waves crashing into the shore.

In the meantime, I am enjoying the moment. Fully investing myself into the world of (author)entrepreneurship and focusing on what I have control of, which is my present. I have the power to see the good in the right now. It is a duty which I no longer take lightly. There is no calm in worrying about the future, nor is there any solace being trapped in the past. The past is nothing but the past…

Now if I see a posting on social media that reminds me of something or makes me laugh rest assured I am going to repost it. I had a sense of humor before I ever had a heartbreak. Let’s not get it twisted, in my present moment, I am still human and people need to accept that. I digress though. In the meantime, I am enjoying these last few days of January and waiting patiently for all that February brings.

4 thoughts on “In the Meantime…”